The TRUTH about aliens and Area51!

One of the features of living out in the rural Nevada desert is the exclusive areas that are supposed to be all "hush hush". Did you know that a very large section of central Nevada is owned by the federal government? Nearly 25% of the Nevada desert is federal military reserve territory used for Air Force testing, originally established in 1941 (set aside by the CIA in 1955). The government has only recently admitted (2003) that they test top-secret aircraft, other secret military weapons and research projects out here and now call it the Nevada Test Center. Just off the middle section of the range is a dry lake bed called "Groom Lake". Groom Lake is better known to most as Area 51 and has long been suspected of housing secret technologies gained from alien visitors.

I love to go out for hikes during the Spring in this high desert region although you have to be really cautious in this neck of the woods because if the feds find you within the boundaries of the test center they could shoot you... and there are plenty of signs posted telling you so. For example, in this picture I linked from the Wikipedia site of one of the warning signs, take notice of that pickup truck in the distance. 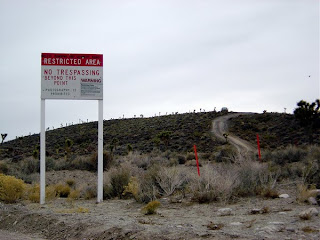 I usually spend a couple days out here and this weekend was no exception. I came out yesterday afternoon for what I thought would be just another uneventful hike and skirmish with federal goons tasked with keeping the place secure but what an adventure I ended up with!

I was out early this morning just after sunrise doing my usual sneaking around and with weather being as perfect as it's been lately I couldn't resist hiking in as far as possible, knowing that "those guys" in the black SUV's, dark sunglasses and plain, black business suits would catch up to me pretty quick and escort me out, like they usually do. What's funny is these guys are just like the characters in the movie Men In Black played by Will Smith and Tommy Lee Jones although, far less sociable.

I can hardly believe what I saw... just about a mile away from me in the open desert a huge UFO (read: alien spacecraft) landed and shortly thereafter an alien was out and moving towards me. I was terrified out of my mind and suddenly, strangely felt very woozy but somehow managed to get my Blackberry out and took a photo before running away like a rabbit ditching a hungry coyote.

I couldn't wait to post this message and photo on the blog for you. Not sure why the thumbnail uploaded from my mobile is blurry but the full-size image displayed when you click the thumbnail is crisp and clean, check it out.


Click the thumbnail below for a larger, crisper view:

I'm going to make my way back to Pahrump now and I'll post more pictures and updates when I get back. Keep checking here for the updates.... =:^)
3 comments: